How To Make A Harley Quinn Costume For Halloween

The Joker's eternal lover is one of the most original costumes for Halloween for women. Harley Quinn is Batman's eternal enemy in Arkham City as she's absolutely devoted to the Joker and is famously known for her characteristic madness, evilness and perversion. If you want to dress up as this mythical comic character, in this OneHowTo article we'll show you how to make a Harley Quinn Costume for Halloween to depict one of the most evil women that dresses in a recognizable and original manner. Keep on reading and learn how to make this costume with your own hands.

We'll start with Harley Quinn's clothes. It's a fancy dress costume that's similar to an Harlequin but with some variations. The main colors in this costume are black and red as they are two tones related to hell and evil.

You should know that this comic character has several clothes, as she is sometimes dressed with a skirt and corset and, in other occasions, she's depicted with a corset and tight pants. Another typical costume for Harley Quinn is with a tight 'onesie' and a Joker hat on her head.

So, depending on what costume you choose you'll be able to go for a skirt, 'onesie' or tight jeans and corset. What's important is that you always used the previously mentioned colors and you should also add some poker diamonds to your outfit so it's 100% realistic.

As you can see, the trick to making an amazing Harley Quinn costume is to incorporate geometrical figures into your costume, as well as combining both colors. It won't be enough to wear a red dress and black tights because she would never dress like this: you'll have to split the dress into different colored blocks and always following a symmetrical order.

If you don't want to purchase a costume, a good way of achieving this visual effect is to get hold of a dress or pants in black and take advantage of any loose red fabric that you may have at home. Sew the pieces on the costume and combine both colors, this way you can create the costume by yourself and won't have to spend any money.

If you have chosen the corset and pants costume, the most adequate thing to do is combine colors correctly in both pieces. There are also several options for colors as we show you in the pictures below so you can choose the one you prefer.

If you don't want to purchase the costume, you can sew the pieces of fabric on both clothes items. If you have tight fitting black jeans or leggings, cut red fabric and sew it on one of the legs. Do the same with the corset or bra, this way you won't need to spend much money.

Accessories are key to this costume as these are the ones that depict this Batman character. If you have decided to wear a skirt, you should know that the most recommended tights are those that reach the thigh, and they'll also need to have diamond symbols or red and black.

So you don't spend money, you can personalize your own clothes by getting hold of some black tights and painting them with white or red fabric paint; you'll only need to draw diamonds on them to get the perfect look. Another idea is to sew one red tights leg to a black tights leg, this way you'll get the same effect.

In the image below you'll be able to see the kind of tights that can combine with your Harley Quinn costume.

The hairdo is also something that stands out in this Batman villain. The girl is blonde and wears two high pigtails, one at each side of the head. This is why it's ideal to dye your hair if you want a really realistic costume, but if you're not up for it you can get a blonde wig. Dip dye each pony tail in black and red respectively. You can do so with crêpe paper for example, as it is temporary dye.

Makeup is also vitally important to get the best Harley Quinn costume. Like the Joker, this girl's makeup needs to look smudged to create a deteriorated and terrific effect. You'll need to cover the base of your face with white paint but you mustn't do so evenly to get a dirtier look.

Harley's eyes should be surrounded with a black mask and you can do this easily with black paint drawn directly onto your face. To highlight the eyes, apply mascara and black eyeliner, to make your eyes look more intense. Another variant of this makeup look is to draw several motifs around your eyes: lines crossing your eyelid, drawing red diamonds, etc...

You may have noticed Harley Quinn's lips, the feared Joker's smile is also present in her face. To create this effect, paint your lips red and seal with translucent powder and then use black lipstick or face paint to follow the line of your lips. Fade the black paint towards the center of the lip a little to create a faded effect and then draw a line from the corner of your mouth up to your cheek with eyeliner on each side.

To round up your Harley Quinn costume you only need to remember that this is a violent and aggressive character. Therefore, you'll need to carry some kind weapon with you. It could be a bat (a very characteristic element) but you can also choose a gun, a mail or anything you can think of.

Want to make a Harley Quinn from Suicide Squad costume? It is true that this last edition depicts Harley in a very different suit from the one we've just mentioned.

First of all, paint your face white, apply red eye-shadow on one eye and blue on the other (smudge it on the bottom lid so it looks a bit more messy). Paint your lips bright red and paint a heart on one of your cheeks with a black eyeliner.

Harley Quinn wears a white and red t-shirt that reads " Daddy's lil monster". You can either get a white t-shirt and paint the red lines and write this sentence or purchase the t-shirt online.

Get some white shorts and dye half of them blue and the other red.

For shoes, wear white trainers or some white boots.

Now you only need to accessorize the costume by putting on a studded belt and some studded and spiked bracelets.

For the hair, if you're blonde then you'll only need to do two pigtails and dip-dye one tail in blue and the other in blue. You can also do this process with a long, blonde wig if you prefer.

If you want to read similar articles to How To Make A Harley Quinn Costume For Halloween, we recommend you visit our Festivities & Celebrations category.

1 comment
Harley Quinn suicide squad Bracelet
03/08/2017
I Love Margot Robbie as Harley Quinn, she is amazing in a character and portrait her character as character's demand, her everything is accurate. her performance, acting costumes and all accessories is just perfect, but what i loved is Harley Quinn Yes Sir Bracelets its undefined piece or you can say a master piece in Harley's costumes...
How To Make A Harley Quinn Costume For Halloween 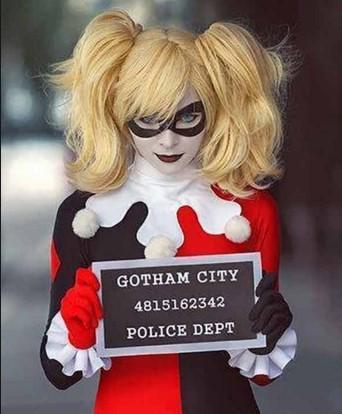 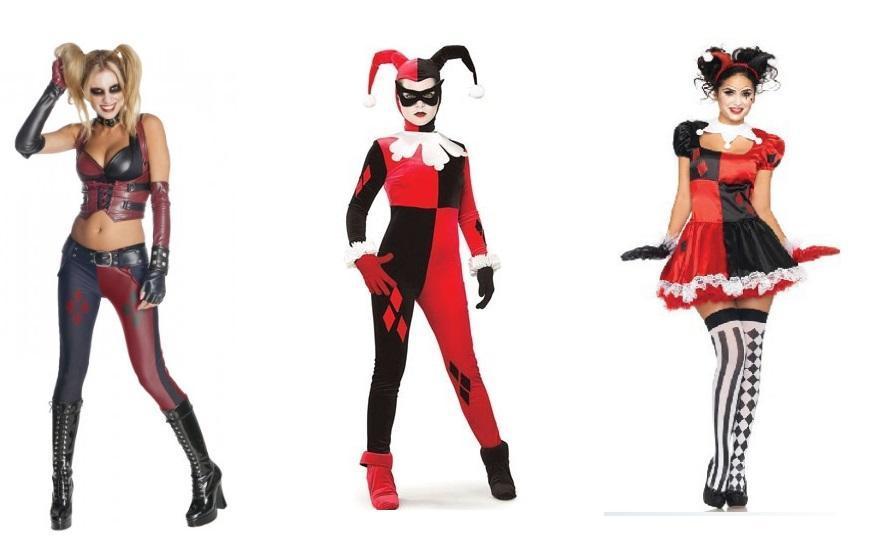 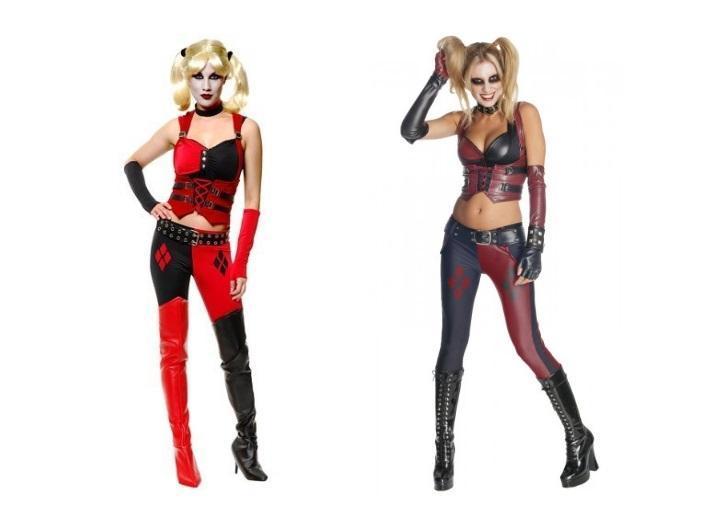 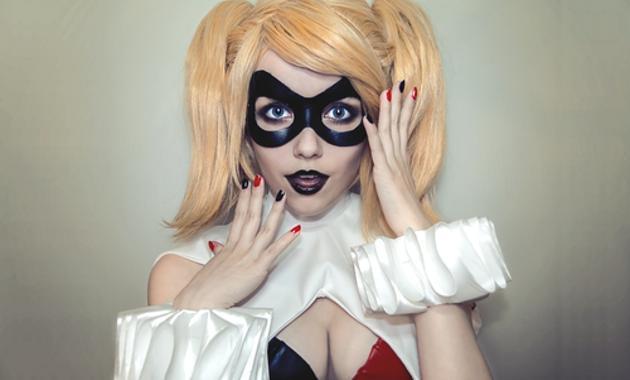 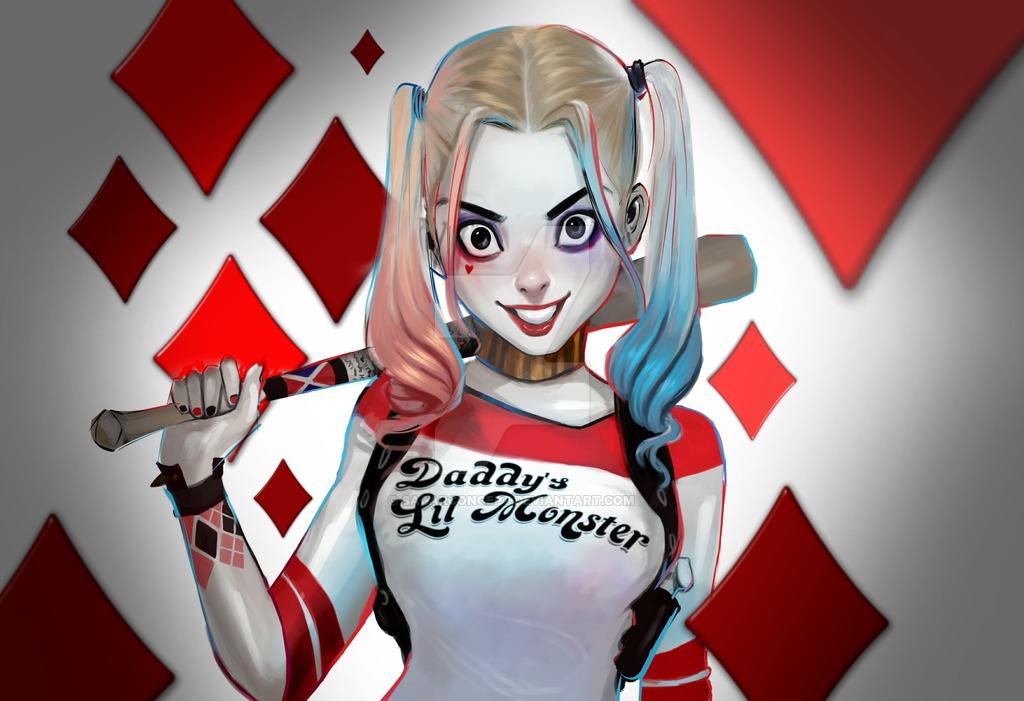 Image: devianart.com
1 of 7
How To Make A Harley Quinn Costume For Halloween
Back to top